Protestantism and Participation is the topic of the second part of the Forum Young Theology in Europe. It will start with a Digital Academy on 3 November 2022 with seven lectures every two weeks from 6 to 8 pm, followed by a conference in presence from 12-15 April 2023 in Sibiu, Romania. There the findings of the lectures will be deepened and specific output for the practice in school, parish, and civil society debates will be developed.

The Digital Academy is open for everybody who wants to learn more about Protestantism and Participation and who wants to discuss perspectives of Protestantism in Europe. The Forum Young Theology in Europe is aimed especially at young theologians e.g., ministers, deacons, religious teachers, students of theology near their exam or in the qualification phase and pastors in training. The preferred language is English and if papers are given in another language the presenters are asked to prepare an English summary.

Participants who register by 15 October 2022 and take part in all lectures will receive a certificate. Participation in the Digital Academy is not a prerequisite for attending the conference in Sibiu, but it is of course helpful.

i register for the 7 lectures of the digital academy

At the May 2022 meeting of the Forum Young Theology in Europe 20 participants produced various workshop outputs on the theme of nationalism and cosmopolitism. First, they developed nine theses on inclusive identity in Christ. With a spiritual guide for worship and a lesson outline, the participants show how to put the theses into practice. Finally, they composed and wrote a canon.

END_OF_DOCUMENT_TOKEN_TO_BE_REPLACED

We asked István Tasnádi from Romania, Juliette Marchet from France and Asbjørn Lauridsen from Denmark: What do you hope to change in your church and for yourself?

We asked István Tasnádi from Romania, Juliette Marchet from France and Asbjørn from Denmark. What impressed you most about the theme of the conference?

We asked István Tasnádi from Romania, Juliette Marchet from France and Asbjørn Lauridsen from Denmark: Why is it important for you to participate in the Forum for Young Theology event?

With much praise and fresh impetus, 22 young theologians from 12 countries look back on an eventful meeting of the Young Theology in Vienna in May 2022. The topic sounds rather difficult: “Protestantism between nationalism and cosmopolitanism”. Is there nationalism in the Protestant Church? “Yes,” says Volkmar Ortmann, Privatdozent in church history at the University of Giessen, Germany.

“The Protestants are not everywhere as cosmopolitan as they like to claim.” That has a lot to do with the local historical developments. Ortmann, who organised this conference of the Protestant Federation of Hesse together with European partners, knows that Protestantism in Europe shows many traditions of its own, up to and including nationalistic currents. “But,” adds his colleague Mirijam Sauer, “language, nationality and identity naturally belong closely together.” Thus, Protestant minorities, as in Transylvania, find strength through their cultural imprint with their own identity.

And because identity is far from being nationalism, the conference team developed the term “toxic nationalism” and distinguished it from “national identity”: “We can’t help it, says Anna Lerch from Switzerland, “where we were born, what language we learned first and what costume we wear at festivals”, but she is of the opinion that we are responsible for ensuring that this healthy “national identity” does not become toxic.

END_OF_DOCUMENT_TOKEN_TO_BE_REPLACED

On 25 May 22, the third programme of the Austrian Broadcasting Corporation reported on the Young Theology Forum, which the Protestant Federation of Hesse hosted with its partners CPCE and ZEO: “Not least because of their national church structure, Protestant churches are usually also closely confronted with the respective political leadership of their country, not only with regard to their positioning in the Ukraine war…” Listen to the whole contribution in this recording in German language 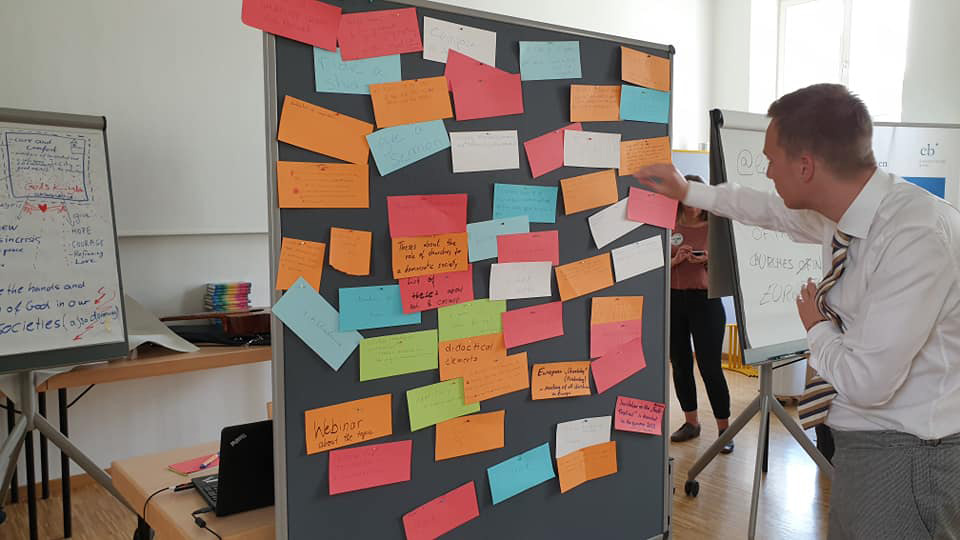 The 22 participants from 12 countries look back on the conference in Vienna with much praise and fresh momentum. The date for a follow-up conference has already been set for 19-22 April 2023 in Sibiu, Transylvania, Romania. with the theme of participation and Protestantism. Further activities are planned until then.

“All those who were present in Vienna are also very welcome in Sibiu to continue working on the topics of nationalism and cosmopolitanism,” says Volkmar Ortmann from the Evangelical Federation of Hesse. Of course, new participants are also welcome. A large number of the evaluation forms from the Vienna conference have already arrived and show “how much impetus the participants bring new ideas back to their churches and countries”.

In addition to the idea of founding a network, a song on the topic is already in the works. Teaching material is almost ready and there is already a list of Bible passages that are suitable for sermons on nationalism and cosmopolitanism. Before the Sibiu conference, they want to meet in a webinar. The Protestant Federation has made a cloud available to the participants where they can collect and process their results.

The next conference will also be organised by Evangelischer Bund Hesse together with the Community of Protestant Churches in Europe (CPCE) and the centre for Protestant Theology in eastern Europe in Sibiu (ZETO in Transylvania).
The Austrian Broadcasting Corporation visited the conference and will report on 18 May. Information on the Young Theology project can be found on the website www.young-theology.eu. 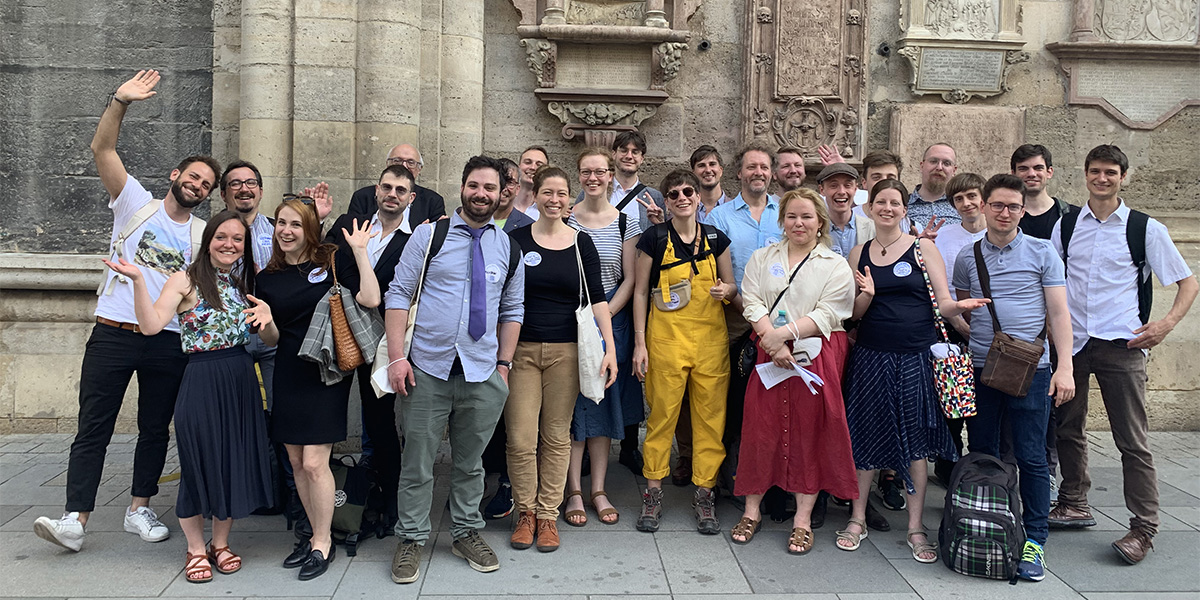 At the Young Theology in Europe Forum conference ending in Vienna on 14 May 2022, participants dictated the idea of a network to continue after the conference. The young people want to deepen the connection between their churches on a practical level. In the end, a book is to be produced. The spokespersons of the 24-member group from twelve European countries are Vittorio Secco from Italy and Frederik Grüneberg from Germany.

Initially, the participants have connected in a WhatsApp group. As early as summer 2022, there is to be a first online meeting. Then, in autumn, an online lecture of the Forum for Young Theology Europe (FYTE) will start. In spring, they want to use the conference in Sibiu/Hermannstadt already planned by the Evangelical Federation of Hesse for their new network. And starting in 2024, there will be an annual meeting of the newly founded network.

The annual meeting will be held every year in a different country, that will be the host of the others. The meeting is to allow the participants to visit the host church in its context, giving the opportunity to attend a worship in that tradition, but also to give a space for academical research, that can deepen the links and the relationship the history and experience of every church involved. This should lead the participant to collect all this researches in a publication for next generations. 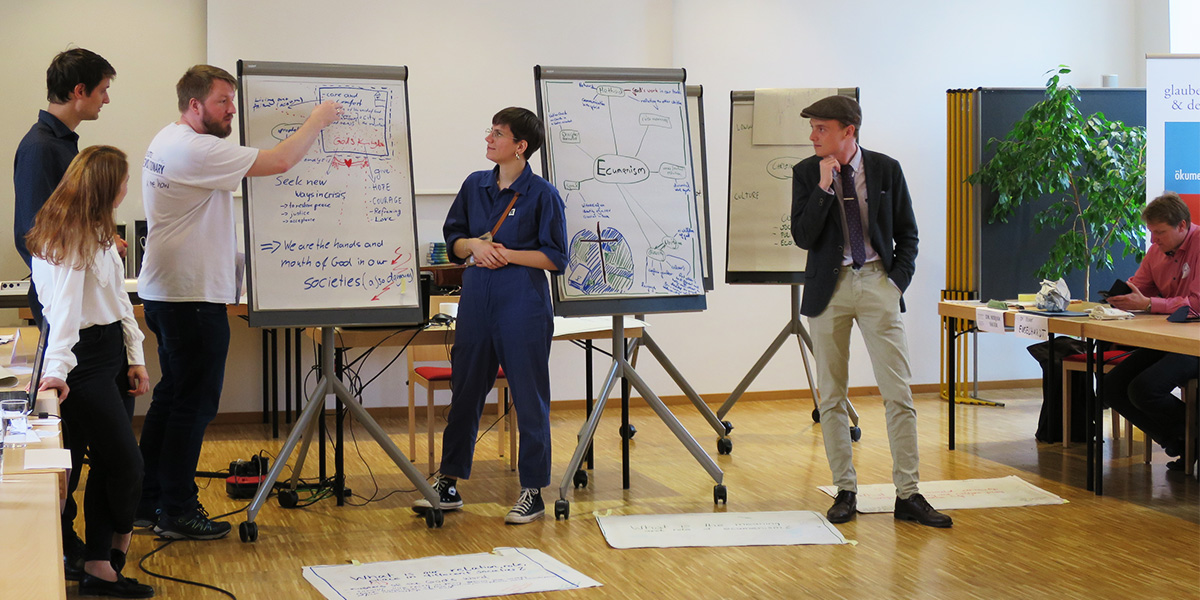 Protestantism between Nationalism and Cosmopolitism

This is the website for the conference Young Theology in two parts. Nov 21 – febr.22  as a digital academy. Is is followed as a conference in Vienna may 11 – 14. Organized by Evangelischer Bund Hesse together with the Community of Protestant Churches in Europe (CPCE) and the center for protestant Theology in eastern Europe in Sibiu (ZETO in Transylvania). The ecumenical conference is funded by the European Union as part of the ERASMUS + program.